Every year on September 24th, South Africans celebrate Heritage Day. The public holiday that has its roots in Zulu culture (for more info visit the South African History website) was introduced in 1996 by Nelson Mandela to honour the multifaceted cultures that together form the Rainbow Nation. In order to celebrate and highlight the commonalities that can be found among the cultures despite all their differences, on Heritage Day, it is common for people to have a Braai, the South African Barbecue, that usually stretches over several hours and basically consists of preparing and eating tons of meat.

However, at the shelter, we had a different programme.

The celebrations took place on the 25th starting in the late afternoon in order to ensure everybody could join in after work. Anyone who belongs to the various community programmes of the area was invited. This included staff and clients from the women’s shelter but also many others attended who for example are part of the programmes for homeless people, disadvantaged young boys and girls or the elderly. By 5:00 p.m., roughly 40 people were present, among them numerous kids, sitting shoulder to shoulder in the entrance hall of the women’s shelter, waiting eagerly for the celebration to start. A lot of people had come in traditional clothing and because of lacking a traditional German dress  (What would it be anyway? And don’t suggest Dirndl and Lederhosen…) I was handed the colourful traditional Ndebele dress plus hat. Check out the pictures: 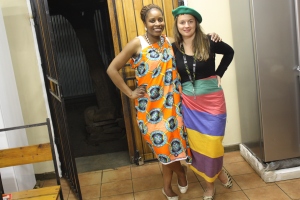 Leah and me on Heritage Day 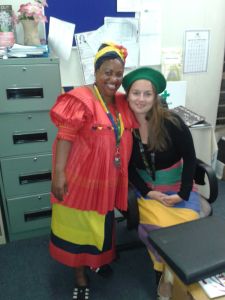 Lovely Ruth in her traditional dress

The ceremony began with a wonderful African song that was stroke up by a lady in a beautifully ornamented blue dress with a matching headpiece. Soon, everyone who knew the lyrics (which were most of the people) tuned in, standing up from their chairs, clapping to the rhythm, forming a wonderful choir. Afterwards, lots of different contributions followed: one guy played a self-written song on his guitar, three girls rather shyly performed a traditional dance. A young man in worn down clothes who might have been around the age of 18 played a soft and sweet sounding melody on his violin. Two women in their colorful traditional dresses put a smile on the audience’s faces by performing a short theater play in which they staged a married couple who within a couple of minutes succeeded to resolve their marriage issues. The atmosphere was great and every performance was honoured with a big applause, regardless if one note or the other had come out the wrong way. Each and every contribution was appreciated and received with great enthusiasm and encouragement. In between these individual performances there was lots of singing, dancing and of course, praying. At the end, everyone was handed out a dish that consisted of traditional food – chicken and Pap, intestines and spinach and freshly prepared ginger beer – that was consumed with great appetite. (Me, I stuck to spinach and Pap…)

To me, it was very special to celebrate Heritage Day at the women’s shelter – the celebrations have truly made an impression on me. Throughout the festivities, an atmosphere of joy, community and companionship prevailed that spoke of appreciation, gratitude and hope.

It’s a pity that in Germany we don’t celebrate a holiday reminding us of where our families have come from. Reflecting on how little I know for example about the region where my grandparents come from (Siebenbürgen, today Romania) Heritage Day has sparked my interest in finding out more about my roots. But that will be another story.

3 responses to “Celebrating Heritage Day at a Women’s Shelter”