The bafflement is apparent in the headline already: 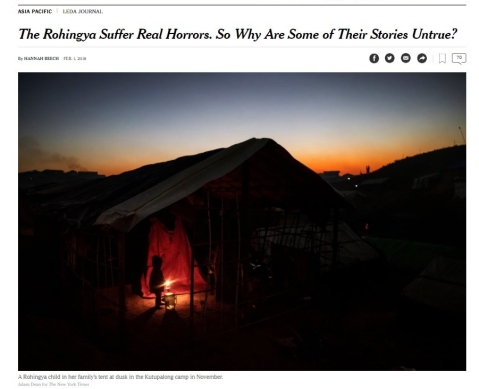 An international charity had put Hannah Beech, author of the referenced NY Times article, in contact with minors who had arrived at a refugee camp in Bangladesh without family members. There, she had spoken to many young girls and boys and if possible, to their relatives. After a couple of days, she realized that she had not always been presented with the truth. The uncle of three orphaned kids turned out to be their very much alive father, the girls’ mother still being in Myanmar.

In any refugee camp, tragedy is commodified. Aid groups want to help the neediest cases, and people quickly realize that the story of four orphaned sisters holds more value than that of an intact family that merely lost all its possessions.

Further in the text, the author elaborates on the dilemma she faces as a journalist:

For every person quoted, I’d estimate that at least a dozen others were left in my notebooks. But a reporter’s necessary skepticism — which governs our work in every story — only contributes to the invasion of privacy. How must it feel for a Rohingya woman, who admits to a stranger that she was raped, when she realizes that her story is being doubted?

Yet I have seen Rohingya people quoted in the foreign news media telling stories that I know are not true. Their accounts, in some cases, are too compelling, like a perfect storm of suffering.

The article closes without an answer, the authors’ uneasiness and qualms of conscience palpable in almost every line.

In one of the top rated comments, a reader relates his experiences from the medical field:

Thank you so much for writing and publishing this story. I have a similar experience, not as a journalist, but over many years working internationally as a physician and public health researcher. It is difficult to express these observations without sounding like a heartless wretch. Human beings can have complicated agendas, ways of communicating can be very different across cultures, and there is a lot of potential for misunderstanding both intentional and unintentional. I still hope that we can find better ways to identify and help people who are truly in need.

What exactly makes “these observations” so hard to express? And what else falls under the category of “these observations” that seem to put the observer in an ethical dilemma? Looking at the assumptions about and expectations towards people who for some reason are identified as vulnerable may help to shed some light on the phenomenon.

In the panel Counselling ‘the Vulnerable’ at the upcoming Vulnerabilities conference in Uppsala, we will discuss counselling encounters in which the neat distinction between the experts and the vulnerable groups they care for becomes blurry. Our topics are going to be quite diverse: from breast cancer awareness raising, legal consulting in informal settlements in Argentina, psycho-social counselling in rural Nepal, trauma trainings in Nicaragua and Germany, and domestic violence counselling in urban South Africa.

Amongst others, we wish to raise the following questions:

Who is or becomes vulnerable in counselling encounters? The client? The counsellor? Or both? If so, how are these vulnerabilities connected and entangled?
In which ways is vulnerability linked to victimhood? Can offenders be vulnerable?
Which behaviour is implicitly or explicitly expected of those identified as vulnerable? What happens if these expectations are not met?

Check out the conference website for more information http://www.sant.engagingvulnerability.se/